Yes, I admit, I have GAS (Gear Acquisition Syndrome).  It's a sickness, but it's kind of fun.  My feeling is that when I'm sitting in the rocking chair at the old folks home, I would rather be able to say "Gibson Country Gentleman? I used to have one of those, I remember what they were like" than have to say "Gibson Country Gentleman? I remember those, I wonder what they were like...."

But the emphasis of this page is to talk about the gear I use and how and when I use it.  So I'll talk about my guitars, amps, and pedals, probably to more of a degree than you want to read about.  But hey, that's geekery for you.  Thanks to Deke Dickerson for inventing (as far as I know) the term "geekery."

Yes, I have a few guitars.  The ones I like best, as far as electric ones go, are Gretsch and Reverend.  On stage or in the studio, with the Lizards or with the country bands, I mainly use three different brands of guitars:

Reverend - I have one of the prototypes of the Pete Anderson Eastsider S model, and it's my #1, go-to, country-twangin', Tele-like object. I've also got a couple of Tricky Gomez semi-hollows which are giving the Eastsider some competition for the #1 spot lately. It's a versatile, Bigsby-equipped beauty that is a treat to play. It's also my backup axe with the Leapin' Lizards. I've got all 3 different flavors of the Pete Anderson hollowbody, which are some of the most versatile and greatest-sounding guitars on the market. They can serve with any band I play with. If I'm in doubt about what guitar I'll need for a job, I bring one of the PA models and I can get the tone I need pretty easily.  Other honorable mentions include the AirSonic and Sensei RT models, which carry on the great-sounding coolness that is rapidly becoming Reverend's tradition.

And not long ago I started playing bass, so of course I went Rev.  I have a Dub King and a 5-string Mercalli 5 that are just as sweet as can be.

Gretsch - I've been fond of Gretsch guitars for a long time, and have had quite a few different ones, but with the Lizards, I mostly use either a Cadillac Green Country Club or an orange 6130 Roundup, equipped with TV Jones or Dynasonic pickups and Tru Arc bridges (aluminum and glass). Loving the big sound of that big guitar and the Brian Setzer Signature TV Jones pickups, or the Roundup with its stock Dynasonics to play a show with.

RainSong - Much as I love Martins, Guilds, and well-made Gibsons, for acoustic guitar duty in any band, I don't think you can beat a RainSong. They stay in tune, don't care about temperature or humidity changes, and they're pretty much indestructible. I've got a WS-1000 that has 17 years and a whole lot of miles on it, but still looks like new.  It's the guitar you hear on the acoustic song ("Believe") on the Lizards' "Spin Me" album.

Lately I've been fairly enamored of Eastman guitars.  They're known mostly for their jazz boxes, and I now have 3 of them, two of which I've modded into rockabilly machines, and one, the t58/v, my favorite of the 3, comes that way.  I've used the t58 in some of our big shows, like the Levitt show in Carson City and the Concert in the Park at Manhattan Beach, and it performed beautifully.

Want to see some guitars I've let slip away (some for good reason, some with big regrets)?  Click here for the Ones That Got Away.

Asking people who makes the best strings is like asking who makes the best pizza.  Everybody has an opinion, and it's usually different from everyone else's.  I played Elixir strings for a long time, and that's their advantage, you can play them for a long time before you have to change them.  But my current favorites on electric guitars come from GHS.  My buddies at TrueTone Music in Santa Monica turned me on to the Burnished Nickel Rockers electric strings, and they've got the tone I need, their slight burnish makes them comfortable to play, and they sound consistently good through their life.  And compared to Elixirs, they're a bargain.  My favorite story about these is when I went into Guitar Center looking for them and when I asked, the salesdude responded confusedly, "Barnacled strings?  No, we don't have those."  Just the thought of strings with barnacles on them makes my left-hand fingers hurt.

Acoustically, I've got several acoustics with soundhole magnetic pickups, and GHS White Bronze drive those pickups better and more evenly than any other acoustic string, and I've been using them for years.  I even have them on my 1936 Gibson ES-150 (with the Charlie Christian pickup) and they make that guitar sound like the vintage ax that it is.  They make a lot of different bronze and phosphor bronze strings, too, and I'm still trying their different flavors to see which ones my guitars like.  As Tommy Emmanuel says, "Your guitar may like different strings from what you do," so since my guitars have to wear them, I'll see what they like best.

Thomastik-Infeld makes a great string, but they make Elixirs seem like a bargain.

Quilter -- Quilters are the perfect amp for the gigging musician. They're lightweight, great-sounding, durable, and they're also made right here in Southern California. I like to mix and match speaker cabinets with my MicroPro head, but I can play an outdoor gig wth my 19-pound MicroPro-8 and be plenty loud, even un-mic'd. And the 8 makes a great acoustic guitar amp, too. I've also got the Steelaire, with its 15" speaker, a Tone Block, an Overdrive 200, a Pro Block, a Micro Block, and my current obsession, an InterBlock.  I run that either into a couple of cabinets, or the DI goes into a Pro Block and out through a Frontliner 2x8 cab.

Fender -- You can't really play guitar in Southern California and not have some experience with Fenders.  And I've had a Deluxe Reverb, a Twin Reverb, a Bassman, a Bassman 50, a 75, a Steel King, a Vibrosonic, a Twin Reverb Custom 15, and even an Amp Can, but right now, the one Fender I've got left is a PA-100 head which has been modded so each of the 4 channels has a slightly different voice, 1 stock, 1 blackface, 1 higher-gain, and one I-don't-know-what-it-is, but they all sound great, and I've got plenty of different cabs to play them through.

Pedals and processors are a big topic with me, mainly because I have a lot of them, and use some extensively.

One thing that's common to all my rigs (except one) is the Nocturne Atomic Brain. It's a preamp that duplicates the preamp of the Roland RE-301 Space Echo, made famous by Brian Setzer. These, and other, pedals are made by Tavo Vega, a rockabilly wild-man who builds pedals for rockabilly musicians, but his pedals are great for lots of different kinds of music. He's another Southern California boy, way down San Diego way.

I used to use a separate pedalboard for the Leapin' Lizards, and it had an Atomic Brain, a Nocturne Nailhead tremolo, and a Nocturne Ubangi Stomp overdrive. It's also got a Strymon El Capistan delay, an unmodded EH Soul Food overdrive, a Mooer EQ (mostly used as an extra boost, though I currently have it set with the low end turned way down to get that sitar-ish sound in Wanda Jackson's "Funnel of Love," which is on our set list a lot), an Xotic SP compressor (shhh, don't tell the Rockabilly Police), a Boss TU-3 tuner, a Boss volume pedal, a Boss LS-2 line selector (for signal routing), and an Aphex Acousic Exciter, which is one of my tone secrets, and also provides a low-impedance DI if I need it. There's also a signal router I built that I call the "X-Box" that facilitates switching between two guitars without having to plug or unplug cables, or bypassing the pedal chain altogether and going straight to the amp (if I ever wanted to do that). This picture is a little out of date, at the urging of Ag Donnaloia, guitar player for the Johnny Boyd Band, I got an Xotic SP compressor to replace the Mooer. I like it a lot better. The compression is much more subtle, and the tone is great.

But that pedalboard took up a lot of room on stage.  So I started thinking about how to resolve that, and it went on to become the Rackabilly.  Click the link to learn its long and sordid history.  Teaser:  there's a suitably-attired outboard reverb tank project I'm working on that will be shown here soon. 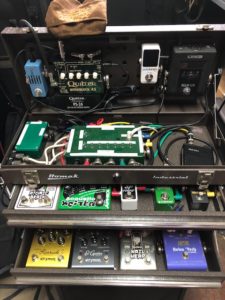 The next one is what I call the Cowboy Board.  I use it most with country bands like Haywire, Sterling Sylver, and even Randy Beckett once in a while.  It's got a Boss GP-10 guitar and amp modeler, along with an Atomic Brain, an Aqua Puss delay, a ZVex Box o' Rock, a Diamond compressor (best compressor ever), an EH B9 organ pedal (for that intro to "Fast As You," and a Radial ABY switch so I can send to either or both of the channels in my Quilter Mach II, Steelaire, or 2 of the channels on the PA-100.  The GP-10 enables me to switch from acoustic to electric and back again, in different tunings, 6 or 12 strings, etc., on the fly, which I need to be able to do in the country bands I play in these days. 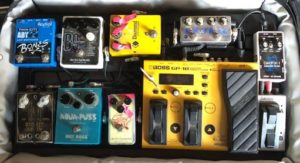 Next, there's the Backup Board.  It's got a second GP-10, an EQ, a Rogue delay pedal (the same cheap one Ashley Kingman uses with Big Sandy; his rationale:  "it's not bad, and if it gets nicked, I'm not out too many quid").  It doesn't see much use (it goes to every gig, but seldom comes out of the van), but if I need to travel light, it's a good grab-and-go that'll cover most everything.

Finally, there's what I have traditionally called The Nuclear Powered Stompbox.  The Roland VG-99 was the apex of guitar/amp/effects modeling in its day, with unprecedented and still unmatched flexibility.  Roland humbly called it "The Future of Guitar."  And it coulda been, but the market said otherwise.  I, personally, embraced it and love it.  I use a Roland FC-300, along with 4, count 'em 4, Boss FS-7 dual footswitches to control stuff.  It didn't hurt that I had a friend who worked for Roland who could get me stuff for less than wholesale, but it was still a great piece of gear.  And when Roland stopped making them, I was said.  When they stopped repairing them, I bought a second one, then in a moment of fiscal conservatism a while later, sold it at a hefty profit.  But I'm going to continue to take care of mine, and hope it lasts a long, long time, because it can do everything I need it to, though admittedly, the acoustic models in the GP-1o sound better. 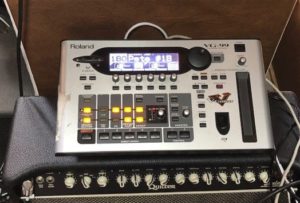 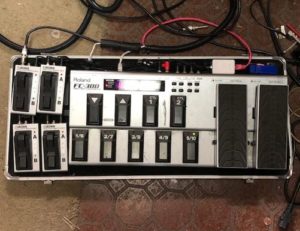 And for jazz gigs, I just use the Quilter MicroPro and a cable.  Still looking for the right size/thickness of a blanket to throw over the amp to get true modern jazz tone :).

Oh, we'll talk all about PA gear in the near future. 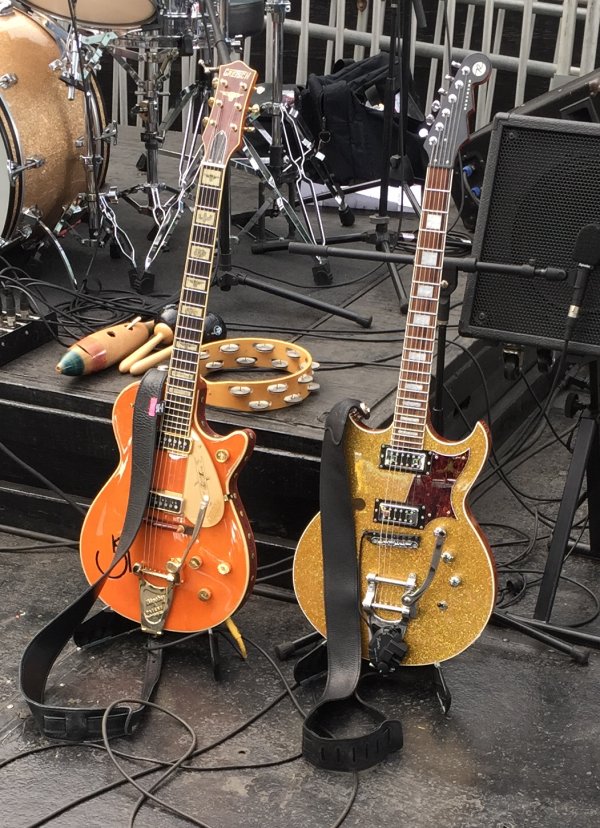 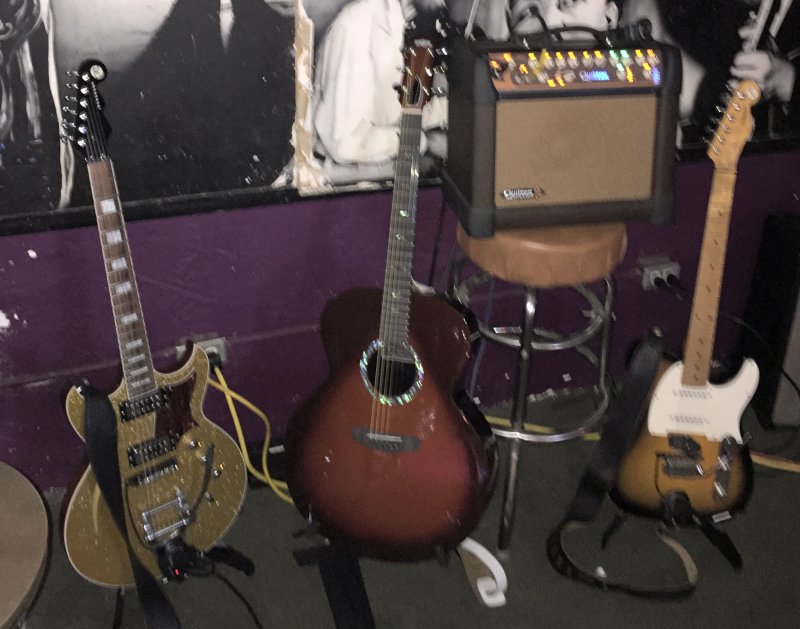 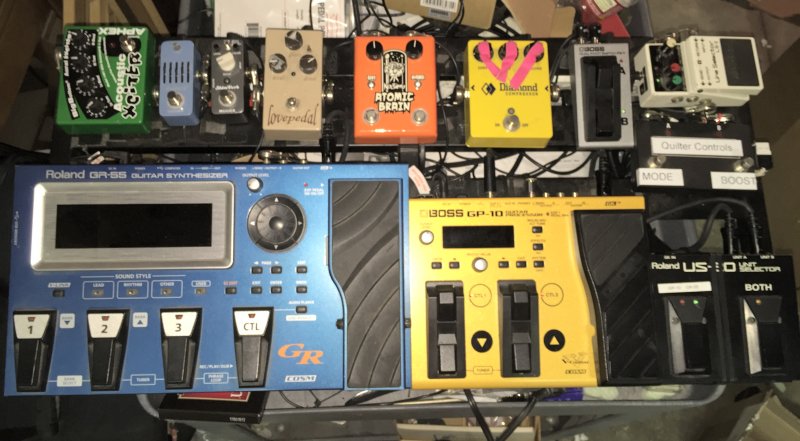 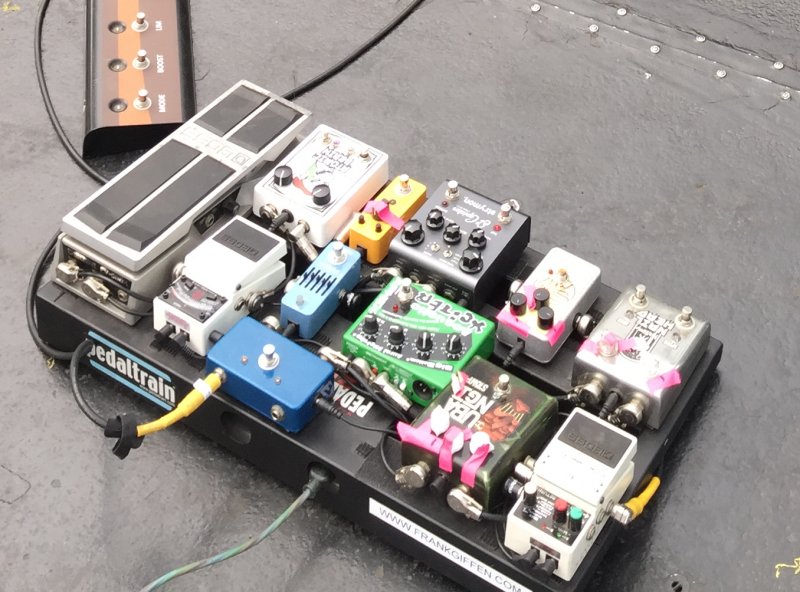 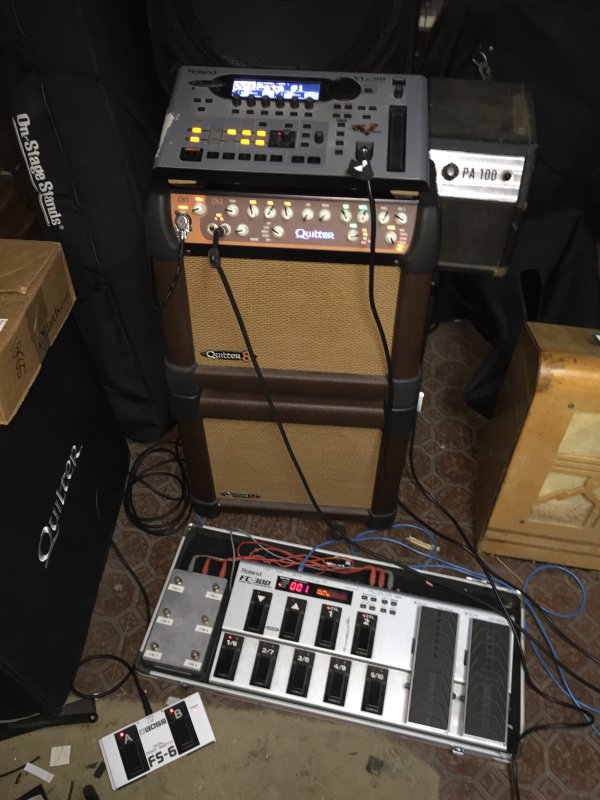